We want to share the experience of various people around running start-ups, especially in IT. 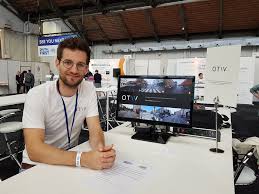 Transcript of the interview:

Peter: I’m sitting here with Niels from the company that is doing some pretty interesting stuff. So can you, please, introduce your company a little bit?

Niels: Yeah. So my name is Niels. I’m a co-founder together with Sam Sander Smith. And our company is actually in the business of increasing safety and efficiency of railway vehicles in complex environments by teaching them to drive autonomously. So that’s our core business. How do we do that? Basically, we add sensors to current vehicles and we have software that gives audible and visual notifications to a driver at first. And then we gather data and we train our algorithms to go to a full self-driving mode.

Peter: So why have you decided to go for particularly railway vehicles?

Niels: During my university years, I got into deep learning and more specifically, computer vision.

And then one part of that was obviously self-driving cars, which is still a big business. And then after the university, I went to Silicon Valley to work there for six months.

Actually there I saw these self-driving cars. I was like how can we do this in cities of Europe? Because in fact self-driving cars are obviously coming, but it’ll be maybe 5, maybe 10, maybe 15 years ahead of time.

So I was like, how we can turn this into a business that actually can give autonomous transport solutions right now or in the near future? Maybe three, four, five years.

And then I started thinking, like, how Europe is different from other continents and countries.

And then obviously, if you look at a tram scheme, public transport, this is a big transportation industry in Europe and not so much in the USA, obviously.

But there it’s either a metro under the ground or it’s a monorail above cities. So these types of public transport don’t really benefit from computer vision technologies or from self-driving technologies.

Then we came back to Europe and we saw that actually the very old cities still have these trams driving through city centers where there are people walking there.

There are cars that are parked wrongly, cars that do crazy, crazy things. Bicycles that are driving across the street. So that’s where we saw that actually this could be a viable business.

And more specifically in Europe, because of the fact that we still use a lot of public transport.

So that’s the main reason why we went there. We went through the tram industry.

Peter: Do you cooperate with some tram producers?

Niels: Basically we deliver our product to three types of clients: obviously RTD tram operators, the people who operate trams in cities.

Then you have these private operators on industrial sites: there are big ports, big companies that have trains and trams driving on their production sites.

So they’re not really into us delivering the hardware, the sensors suites, that stuff. Probably when we are a bit further in our roadmap, there might be the corporate cooperations with manufacturers.

But for now, we’re focusing on actually retrofitting. So it’s putting sensors on current vehicles, working with tram operators and private industries.

Peter: So some sensors like optical sensors and some hardware that is computing this…

Niels: That’s the thing. So we’re working with a sensor suite that consists of cameras and radar. We think that LADAR is essential in this kind of setting.

We also use GPS, IMU and accelerometers. And obviously we work together with video for the